The LEGOLAND Hotel is a five-story LEGO-themed hotel featuring 152 brightly colored and highly themed rooms and suites, thousands of LEGO models, and interactive play areas. Built for kids, the addition of the hotel allows guests to extend their stay and explore LEGOLAND Florida Resort for more than one day. The hotel features 152 guest rooms and suites across four themes: Pirate, Kingdom, Adventure, and LEGO Friends. Each room sleeps up to five and offers a king-sized bed for adults and a separate sleeping area for up to three children, featuring a bunk bed and a trundle bed, as well as two flat-panel TVs. All rooms and suites feature LEGO models and a treasure chest, which can be unlocked only by completing a hotel scavenger hunt.

We worked hard with aRes Travel Agency to get you the best discount for LEGOLAND Florida and Peppa Pig Theme Park tickets possible.

Join our newsletter and receive a coupon code for an additional $10 off on each ticket on already discounted LEGOLAND Florida tickets!

Using the links below, you can buy your LEGOLAND discount tickets for only $67.37! No need to print your tickets, just show your phone at the gate!

We were also able to work out extremely discounted tickets for LEGOLAND California and LEGOLAND New York. 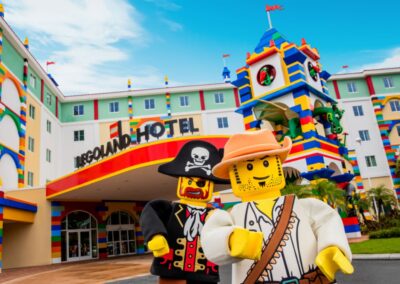 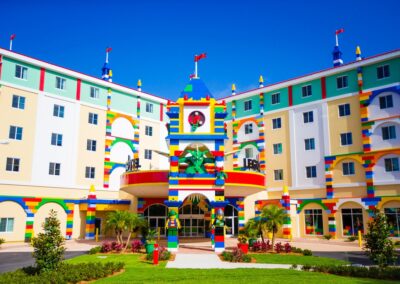 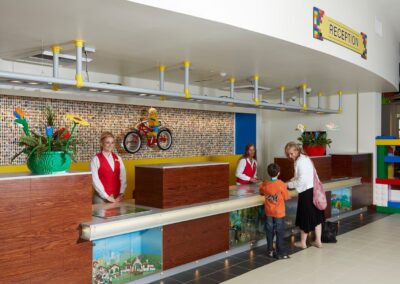 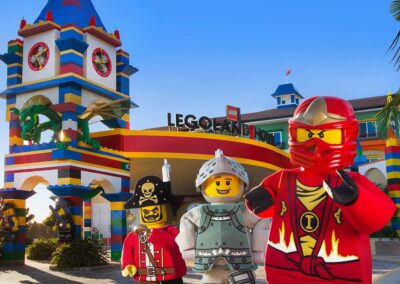 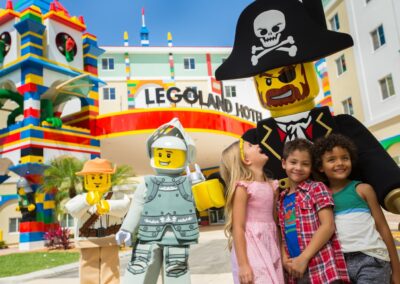 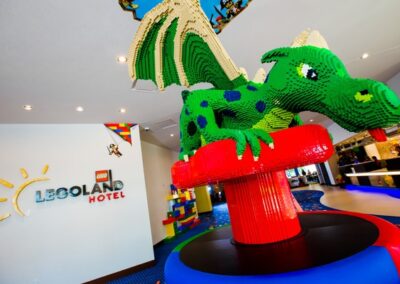 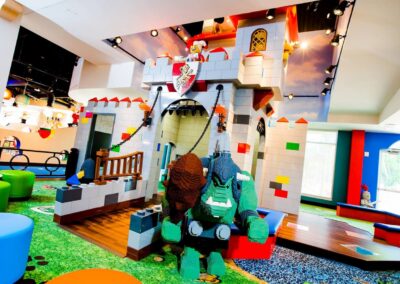 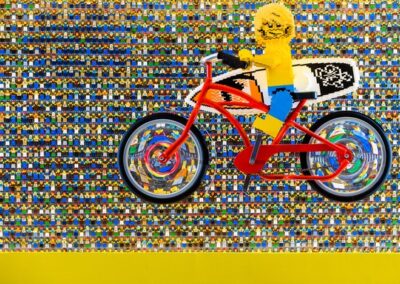 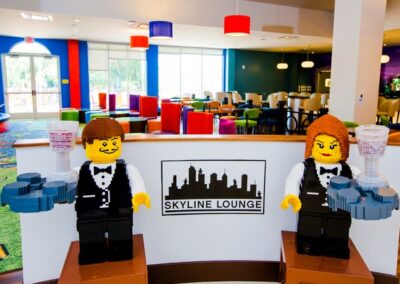 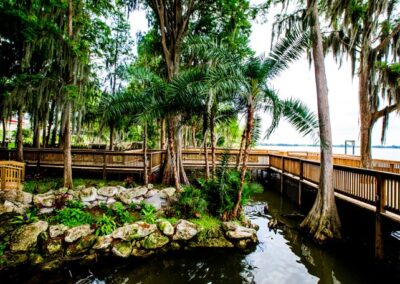 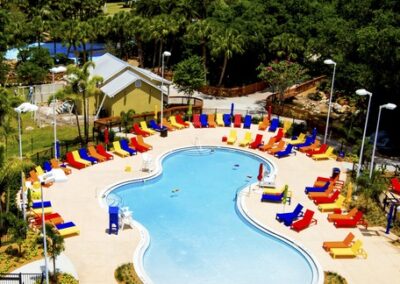 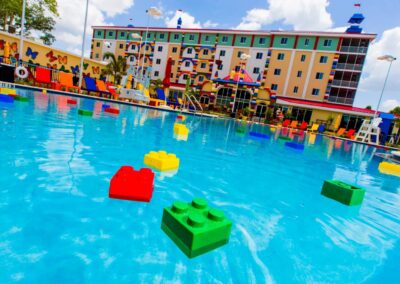 Looking for the most adventurous stay you’ve ever had? Spend the night in a place where the adventure never stops!

Explore this adventure-themed room in the footsteps of the famous LEGO hero adventurer, Johnny Thunder.

Send your young explorers to their own bunks, complete with an entertainment center and an in-room treasure hunt, while you relax in your own king-size bed and themed models. Prepare yourself for the ultimate adventure!

Greetings, mateys! Step aboard Captain Red Brick’s ship and become a member of the crew in these pirate-themed rooms.

Enjoy the captain’s quarters, which include a king-size bed, and send the rest of your crew to a separate first mate’s cabin, which includes bunk beds, an entertainment center, and their own in-room treasure hunt!

Sail the high seas with Polly, a LEGO parrot, and other themed models and fun throughout the room for a memorable stay!

These rooms can sleep up to five people and include LEGO models and a separate children’s sleeping area.

In the Kingdom themed rooms, you and your family will be greeted with a royal welcome. Enter the world of knights and princesses as shields, flags, themed LEGO models, and an in-room treasure hunt bring your LEGO kingdom to life!

All rooms provide accommodations for the entire royal family, including a king-size bed and separate sleeping quarters for the junior royals, complete with their own entertainment center!

The room sleeps up to five people, features LEGO models, and has a separate children’s sleeping area.

You’ve been invited to the ultimate sleepover by the LEGO Friends! Step into the world of Heartlake City and have some fun with your friends.

Stay at Heartlake Stables with your favorite Friends and laugh the night away with a king-sized bed and a private bunk bed for the kids.

Each room comes complete with entertainment center, themed models, and everything you need for a sleepover you and your family will never forget!

These rooms can sleep up to 5 people and include models from the series and a sleeping area for kids.

In the new THE LEGO MOVIE Rooms, you’ll have an AWESOME time at the LEGOLAND Florida Resort!

Be among the first to experience the all-new THE LEGO MOVIE themed hotel rooms, where everything is AWESOME!

These rooms can sleep up to five people and feature LEGO models and a separate children’s sleeping area.

Good day, young Ninja! Step into the temple courtyard; the cliff top provides a panoramic view of all of NINJAGO as far as the eye can see.

The bed is located at the base of a large shrine that houses all four epic elemental weapons. Send your little Ninjas to their own private Dragon Cave after a day in the Park, while you relax in your king-sized bed.

Ninjas and non-Ninjas alike will enjoy discovering each Ninja’s unique abilities… Which power will you wield? 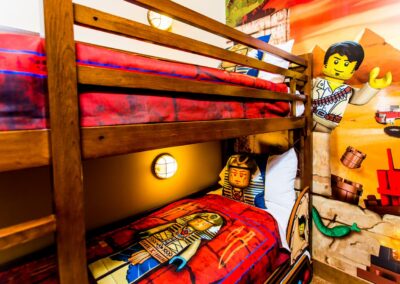 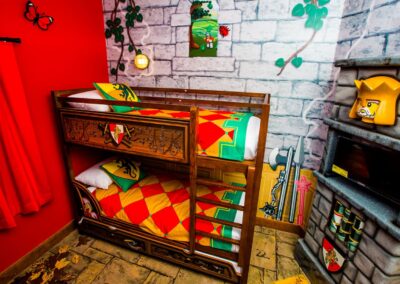 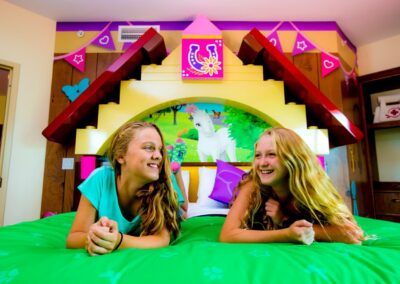 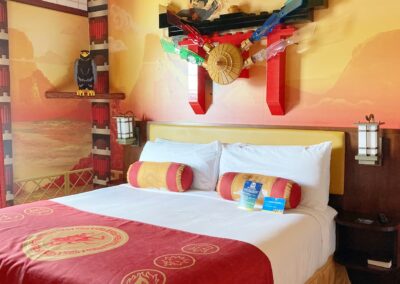 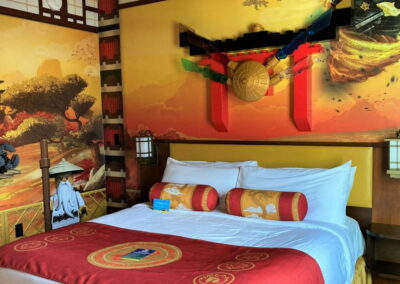 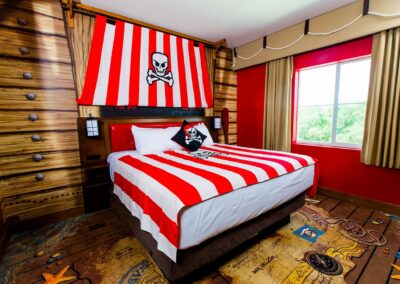 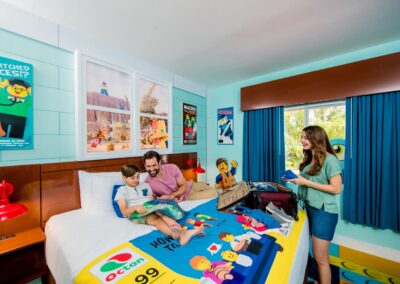 Whether you are staying at Pirate Island or the LEGOLAND Hotel, a family-style breakfast hot skillet is the way to go! Both restaurants offer all-you-can-eat classic breakfast foods and healthier options. They also provide VEGETARIAN and VEGAN alternatives to suit everyone in the family.

Breakfast is served on a first-come, first-served basis because we know you’re on vacation and want to wake up whenever you want!

Get up and go! Wake up with us in Bricks Family Restaurant, where you’ll find an endless variety of breakfast options served family-style at your table!

Enjoy the breakfast feast that the pirate galley has prepared for you, lads and lasses. Morning bounty for all, including all the classics and more!

After a long day of exploring LEGOLAND, have you worked up an appetite? Are you hungry enough to eat a Kraken? With its 3-course, all-you-can-eat menu, Shipwreck Restaurant is the place for you. Were you looking for something a little more manageable? Skyline Lounge offers a more traditional, full-service dining experience that will tantalize your taste buds.

This all-you-can-eat restaurant offers a bit of everything, including a kid-sized buffet with all their favorites! And did someone mention ice cream?

Children may rule this city’s skyline, but parents are welcome as well! American-style cuisine. This hot spot comes to life with lunch and dinner menus, a full bar, and a LEGO-themed play area.

Where is the LEGOLAND Florida Hotel Located?

LEGOLAND Florida is located in the city of Winter Haven, just 45 minutes from the Orlando parks or downtown Tampa. 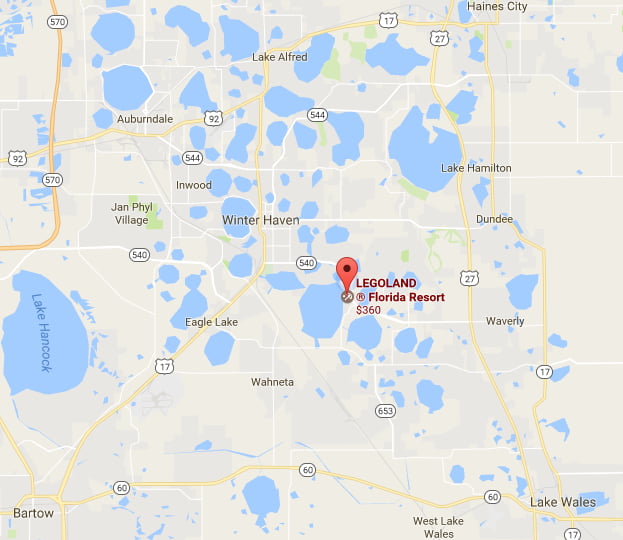 Located just a few steps away from the main entrance of LEGOLAND Florida Resort Theme Park.

Is it worth it to stay at the LEGOLAND Hotel in Florida?

But basically, it is AWESOME. It might be a splurge for your family, but you’ll soon discovered that there were so many perks to staying at the hotel that it really was worth it to stay at the Legoland hotel for the experience! Your kids will really loved it and adults will have a lot of fun too!

The LEGOLAND Florida Hotel is a great place to stay if you visit LEGOLAND. It is conveniently close to the theme park entrance and offers beautiful amenities such as a year-long heated pool with floating LEGO bricks. The rooms are spacious and have separate areas to accommodate families with children comfortably. Guests can also enjoy a free all-you-can-eat breakfast buffet in the morning then take advantage of discounts and freebies for hotel guests.

Here are a few more reasons to stay at the LEGOLAND Florida Hotel:

*Opening times are subject to change